"Let us create vessels and sails adjusted to the heavenly aether, and there will be plenty of people unafraid of the empty wastes." — Kepler
The Book-House: Find Spelljammer products.

Forgotten Realms Explained has a video about Realmspace up: Realmspace, The Faerun Solar System - D&D Lore: 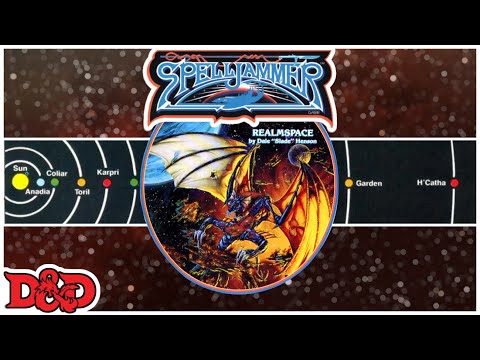 Jorphdan does a pretty good job of explaining Realmspace to someone interested in Forgotten Realms.

I think there are a couple of mistakes in the video.

He starts off explaining why there are crystal spheres pretty well.

But he then shows something like a flat ribbon, when he is talking about the crystal sphere appearing to be a flat wall. It's really sad that he did't get the the crystal sphere is a sphere...but the sphere is so big that the curvature is almost impossible to see from the surface. That is what makes it seem flat. He says this is confusing. It's a real shame that he didn't reach out to some Spelljammer fans that could help him find a way to dispel this confusion.

When talking about the stars, he says that "the only star in Realmspace is the Sun. That's misleading because suns and stars are specifically not the same thing in Spelljammer. The Sun is not a star - it is a sun. That's a real shame as he clearly is pretty good at explaining FR subjects. But because he then says they are not really stars, it creates some confusion (in what should be clarifying things).

He talks about the Wanderers. I really like this, but he left out the fact that the Wanderers stopped moving and chanting, during the Time of Troubles. That's one of the things that helped people find out what they do...and also an indication that Realmspace was sealed off from the rest of the Spelljammer universe for the duration of the Time of Troubles. So he covers the story pretty well, but kind of misses the point.

He gets into the real meat of the video after this, going through the celestial bodies of Realmspace. This is the best bit.

The Kapri description is also great, but the example ship he shows, when he talks about ships landing on the planet is sadly a ship that is actually not capable of landing on planets.