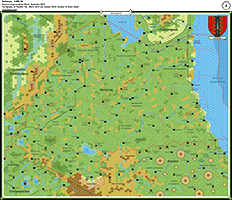 View this map's page in the Atlas of Mystara for the full resolution map: http://mystara.thorfmaps.com/bettellyn-8/

If you have any comments, corrections, or suggestions for things to add to the map, please post them here.
If you enjoy my maps, please consider supporting me on Patreon.

Hi Thorf! Just going through some of Bruce's old articles and I noticed this discrepancy between the article and the map. From:

Bettellyn: A Million and One Tombs -- Pt. II

In the section titled "The Prelacy of Masalioth" there is a map centered around a town called "Masala". I'm assuming that Masala should = Masalioth. Or perhaps there is another town actually called Masalioth somewhere on the map, and the article is just showing the wrong region? I'll keep looking but I suspect the former.

EDIT: Nevermind, I think I figured out what is going on here. The Prelacy of Masalioth is the name given to that entire region, with Masala being the main community. I was confused by the wording of the article which made Masalioth sound like a community rather than a region.
THRESHOLD Magazine - The Mystara Fanzine
Visit the Exiles Campaign Setting (a Mystara / Spelljammer crossover)
Visit Mystara 2300 BC

Moderator of The Tabard Inn and Blackmoor. My moderator voice is purple.
Top
Post Reply
2 posts • Page 1 of 1