Has anyone looked at the real-world geological processes that were happening back in the Jurrasic Earth and looked at how that sort of process might still work on a planet that is actually a hollow world?

Could the Known World still have continental drift and all that other stuff going on without land needing to go in and out of the Polar Openings?

Or could the idea of things being "moved into the Hollow World" happen literally sometimes?

If you don't have that going on, how else can the Skothar mountain ranges be explained?

yeah . . . . the hollow world screws with tectonic plates and continental drift, basically it wouldn't happen. continental drift is dependent on the heat and pressure derived from the layers of superheated liquids and solids. Specifically the Athenosphere(upper Mantle) is what causes the tectonic plates to shift and expand and contract; as it is, the hollow models created by thorf just don't have a thick enough shell to support the athenosphere, and even if it did, the density of the material would have to be drastically increased to make up for the hollow center. the physics and geology of the whole situation is the main reason I'm hesitant to have the hollow world in my version of Mystara. I've been thinking about just transplanting the general cultures of the hollow world to a corresponding place in davania or skothar(nithia to Arypt). I have been searching for any scientific/pseudo-science explanation that would support the hollow world AND maintain the presence of tectonic plates, and none I have seen are remotely plausible. The closest I have come is this jewish guy who rejects western/christian science and in the process throws out gravity and explains the effects of gravity with electro-magnetism and some other weird stuff. I don't think his work is really correct or logical, but he's the only person I've seen who works through the equations and everything in a rigourously scientific manner.

So the bottom line, either the world is solid and has tectonic plates, ergo continental drift, or the world is hollow and has a static surface (therefore not being earth in the age of magic). Of course you could always say 'because magic!' and have both


As the planet Mystara is a biological creature according to canon, I assumed there is NO tectonic activity. Yet Cellular activity instead.
https://breathofmystara.blogspot.com/20 ... alith.html, and https://breathofmystara.blogspot.com/20 ... grath.html
These cells have their own individual movements (up, down, tilt, rotate clockwise, counter clockwise, or tilted, and more. New cells are added while old cells implode, dry out, and in between large caves areas become known(all not existing in such mass and size on RL Earth), on the surface (HW and OW) thus creating the land, mountains and sees, yet also enabling the many many ...many..plateaux existing on Mystara suddenly or slowly coming to be or sinking.
It also explains why Meteors have a different effect than on our RL tectonic world would be in case of an impact.
http://pandius.com/The_Great_Crater_Conundrum.pdf

Just to help thinking in another way.
A living creature is namely NOT a tectonic world, and everything will be different, even if the outward appearance would suggest similarities. This includes; activity, changes, time of changes, resistances, gravity, and most and foreall something we on RL Eatrh absolutely don't have MAGIC.
My Deviantart page; http://6inchnails.deviantart.com/ For Mystara hexmaps and Fantasy art
(to see all fantasy art; log inn and declare you are an adult...frigging exposure rules)

Thanks... I'm gonna finish building the style and the like first. I'm really happy with it so far.
Top

I'll await your work here on the Piazza.
btw i am happy with it too, and i imagine many other will do.

one note; as you removed the hexes, you also removed the only way to determine scale...could you correctly add this to the map?
My Deviantart page; http://6inchnails.deviantart.com/ For Mystara hexmaps and Fantasy art
(to see all fantasy art; log inn and declare you are an adult...frigging exposure rules)

Yeah, I'm looking at the best way to sneak a scale or key in there.
Top

So, I've been picking at this for a bit now.... and had some interesting results to share.

A special thanks to Thorf for helping me out with some reference materials in a different form or three.

The world map especially looks great. The zoomed in areas look like they’ve been clipped for some reason (perhaps due to stroked rather than filled vectors as a base...?), resulting in a loss of land all round the coasts.

I guess you went for a stretched version after all? Based on the Hollow World Set map, perhaps?
If you enjoy my maps, please consider supporting me on Patreon.

Yeah, it was peculiar. To make the 'global' size work... I had to chop it a bit more than I liked. A portion of this is the conversion from vector to raster stroke styles in the last couple of phases. I settled on this approach because at 300 DPI, 1 pixel sized rivers are not really visible.

So, I think I settled at 5 px across.

I'll put up the DEMs shortly, they show only a single pixel width and are looking amazing for doing a true scalable image from something like 4.5 km/inch to about 400 km/inch.

Now, as for which dang Hollow World versions of the maps... its more of a question of the most recent canonical version of the maps. I'm still tweaking and changing things, but it might be the version I use.
Top

The best catch is that it creates something like

These are the vector masks at around 3px:

They look far better at the regional level... thoughts?
Top

This one looks amazing!

What I’m getting at about the stretching thing is that there should be a massive ocean covering almost half the world, with the continents taking up the other half.

To see what I’m getting at, you might want to check out the following two articles:

Here’s how the shapes should ideally be transferring to the globe (from the second article above): 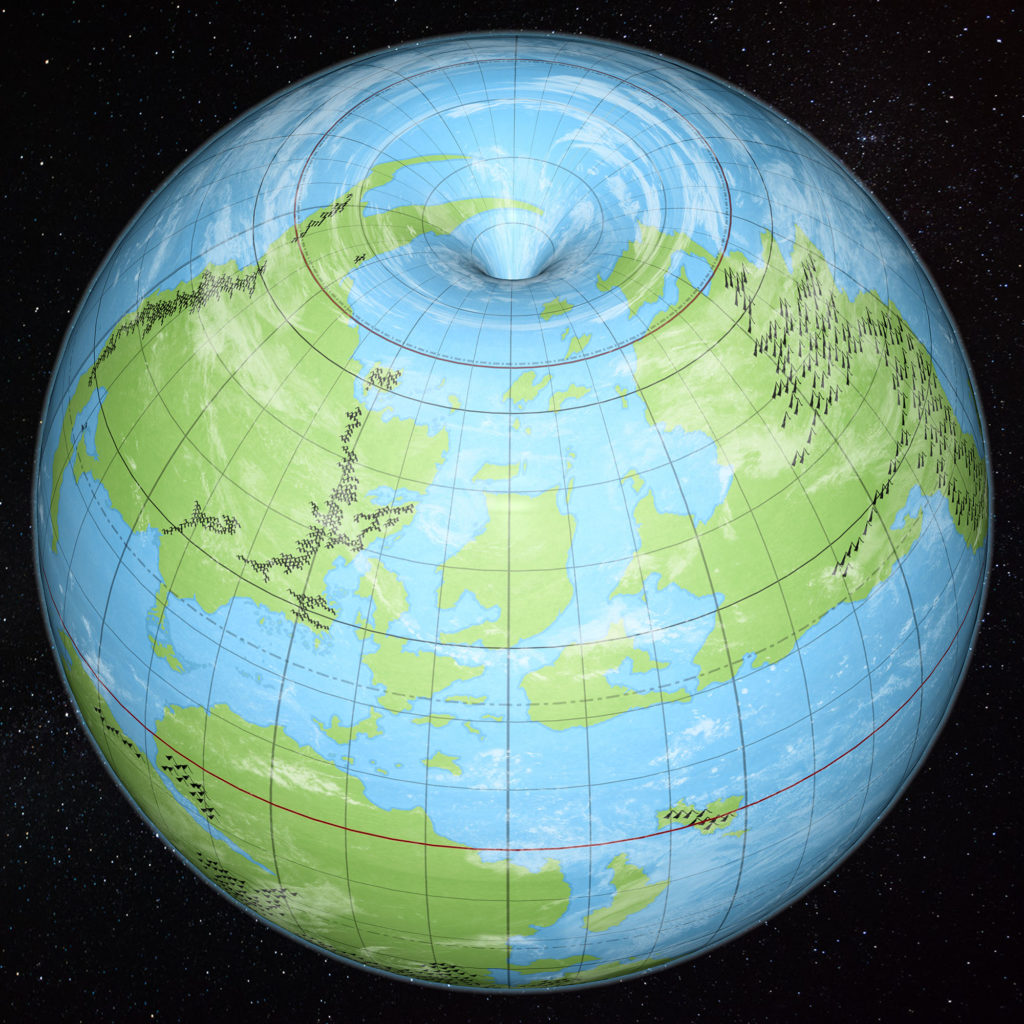 They look far better at the regional level... thoughts?

These are looking fantastic!

What program are you using?
Top

Something about the cloud cover is bothering me; it seems like the ITCZ is rather weak, and the clouds in the north/south are rather thick though that may be a blending with the ice caps. that's just my gut reaction, so take it with a grain of salt.
The question is: how many rolls of Duck Tape are needed to hold the universe together?
The Answer to the Ultimate Question of Life, the Universe, and Everything is: 42
42 Rolls of Ducktape
Web Map of Mystara
Top

You know there are days that I really dislike understanding even the slightest components of those sort of articles, Thorf. Yes, I used the HW map set as a base. And in reading the materials, you are absolutely correct, there is a bunch of missing ocean.

As for the clouds in the ITCZ, I specifically chose clouds that didn't cover too much of the map, especially the known regions: KW and Savage Coast, since a large part of these would lay within the equatorial cloud belts.

I'm going to fool around with adding a few more clouds into that region today and try to correct the projection.
Top


These links both show only ; This Facebook post is no longer available. It may have been removed or the privacy settings of the post may have changed
pity
My Deviantart page; http://6inchnails.deviantart.com/ For Mystara hexmaps and Fantasy art
(to see all fantasy art; log inn and declare you are an adult...frigging exposure rules)

I saw that, indeed. Facebook must have changed how they let people embed posts. It's a shame, and it's also irritating that they make changes that break this sort of link. I could probably fix them, but fishing out those posts again would take ages thanks to the way Facebook works — you just have to keep scrolling down until you find it.

Besides, they might just break again. Next time I guess I should just use screenshots.

Thankfully the actual discussion on the links is not essential to understand my blog articles.
If you enjoy my maps, please consider supporting me on Patreon.

Dindn't you have these same maps on your Blog?
if so then maybe add those links instead...as facebook sucks greatly, especially at service and privacy
Indeed the discussion can sill be enjoyed

My Deviantart page; http://6inchnails.deviantart.com/ For Mystara hexmaps and Fantasy art
(to see all fantasy art; log inn and declare you are an adult...frigging exposure rules)

Robin wrote: ↑
Thu Jun 13, 2019 10:03 am
Dindn't you have these same maps on your Blog?
if so then maybe add those links instead...as facebook sucks greatly, especially at service and privacy
Indeed the discussion can sill be enjoyed

Robin, did you not notice that if you scroll down the rest of the post is still intact? It’s just the embedded Facebook posts that are gone.
If you enjoy my maps, please consider supporting me on Patreon.

Yes I did, somewhat later. That's was the reason I could still enjoy the discssion ;P
My Deviantart page; http://6inchnails.deviantart.com/ For Mystara hexmaps and Fantasy art
(to see all fantasy art; log inn and declare you are an adult...frigging exposure rules)

I managed to identify the problem, and the embedded Facebook posts should all be appearing once more. I added in links to the actual posts as a way of future-proofing the articles against further problems, too.

By the way, thanks for letting me know about the problem, Robin.

Alright, so... I haven't gone back and corrected some of the stretching issues on some of the rasters, but this seems to be about right:

What's sad is that I think I actually like the skewed projection from the HW materials and RC.
Top

So, overall, I'm pretty impressed with the scalability. I'm going to go back and trim up the forests a bit.

I just threw some little fort and village icons in there to mark spots.

Here's a quick hack showing how the world map should look with the borders cropped properly — remembering that this is Mollweide projection, so it's not a rectangle but rather an oval. Edit: I was going to reproject this into Equirectangular so it could be put on a 3D globe model, but my laptop doesn't have the right software to do it, so it'll have to wait until I'm at my home computer.
If you enjoy my maps, please consider supporting me on Patreon.

Yeah, I was debating whether it would be Mollweide or equirectangular, I'm wondering how lazy the mapmakers got at TSR during that era.
Top
Post Reply
66 posts