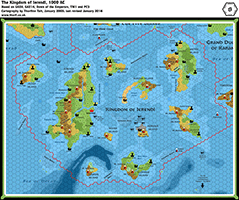 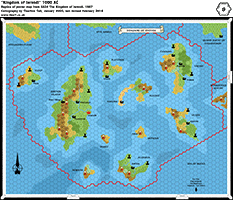 by Thorf
Update: I added the original colours map. It seems that my current palette is remarkably similar to the GAZ4 poster map's palette, although the deep sea colour of this map makes the change more obvious.

Incidentally, in order to get the most accurate original colours I can, I spent some hours last weekend scanning in almost all of my Mystara poster maps. Let me know what you think of the results. (The effect may vary depending on your monitor. My monitor is a Dell 24 inch wide.)

by Thorf
Update: Added the new reef, hills, and castle border art to the replicas, and uploaded PDFs.

by Cthulhudrew
Some notes on this project to add (in case Thorf or anyone else ever returns to it):

It looks like the maps dropped the Volcano symbol for Mt. Makalaui. On the Ierendi replicas, it got replaced by a mountain hex; on the trail map replica, the volcano hex lost its color.

There is a map of Safari Island on p.44 that adds some details to the island not on the larger Gaz4 map. The volcanic mountain range is called the "Tikka Mtns." The swampland in the northwest is called the "Kuali Swamp," and there are plateaus along the southwestern hills called the "Cliffs of Para." There are also a couple more rivers and tributaries from the Wautili marked on the illustration- one coming between Calatupos and the hills to the west, and a tributary of the Wautili that branches off into the Kuali swamp. It also looks like there might be two very tiny islands off the furthest western tip of the Tikka Mts.

by Cthulhudrew
Another thing I just noticed (I'm scouring the gaz for other reasons right now, and using the map as a reference):

The aforementioned Mt. Makalaui is referred to as Mt. Haumea on pg.6 of the gazetteer:


"... in 786 the entire population of Port Siers- over 1,000 people- was killed in less than an hour by a cloud of burning ash that descended Mount Haumea and washed over the sleeping town like the Black Legions of Death."

Probably a case of later authors trying to label some of the geographic features of the islands that weren't labeled on the maps, and causing a conflict with the text. I know it happened in a couple of other cases with Ierendi features (and even the gaz itself conflicts with itself on certain points, such as saying that Honor, Elegy, Roister, and Fletcher were all created when the Kikianu Caldera exploded- when it probably meant Honor, Aloysius, White, and Roister.)

by Thorf
Check the first post in the thread for a link to the newly updated map! This one was rather fun to do. I also restructured the Notes section to make it far easier to read and refer to. All notes are now in a single alphabetised section, rather than having a section for each source.
All times are UTC+01:00
Page 1 of 1