Sind, 8 miles per hex by Thorf 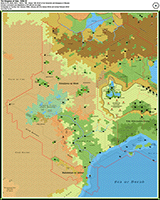 Awesome, I've been waiting for this one!
Top

Looks good as always Thorf! I have a pet project involving Sind that I am working on so this will be very useful!

Havard
Aliases: Håvard Frosta, Havard Blackmoor, Blackmoorian, Dragon Turtle etc
Where to find me on the Web
The Comeback Inn - My Blackmoor Forum
The Blackmoor Blog
THRESHOLD Magazine - The Mystara Fanzine
My Articles at the Vaults of Pandius
Moderator of the Mystara, Blackmoor and Thunder Rift forums.
My moderator voice is GREEN.
Top

A bit off-topic, but don't you find it odd that Sind has so few cities and towns? IIRC Shajapur has, OTOH, very large cities.
Information Wants To Be Free
Hervé Musseau http://www.facebook.com/profile.php?id=1223372668
Top

Andaire wrote:A bit off-topic, but don't you find it odd that Sind has so few cities and towns? IIRC Shajapur has, OTOH, very large cities.

It's not really a fair comparison, though; Hollow World civilisations tend to thrive in their new conditions. Shajapur has vastly better terrain than Sind, less threatening neighbours, and room to expand. Sind on the other hand has problematic neighbours all round, as well as being on the edge of a desert, with a huge swamp.
If you enjoy my maps, please consider supporting me on Patreon.

It is true that the Azcans have a huge empire too, or that the Traldar are much more extent than modern Traladara. I wonder how the Milenian Empire compares to its forebear at its height on Davania. We don't have as much info about the extent of the other civilizations; Nithia is larger than the modern Emirate of Nithia, obviously, but the Nithian Empire at its height ruled over the whole KW, to the SC, NW, DV, and the IoD.
Information Wants To Be Free
Hervé Musseau http://www.facebook.com/profile.php?id=1223372668
Top

I just posted a new version of this map!

By the way, does anyone happen to have a saved copy of the original thread for this map at Wizards MMB? I have some saved, but not that one.
If you enjoy my maps, please consider supporting me on Patreon.

I managed to find the first page of the thread on the Wayback Machine. Better than nothing!

Thorf wrote:I just posted a new version of this map!

By the way, does anyone happen to have a saved copy of the original thread for this map at Wizards MMB? I have some saved, but not that one.

Thorf, there's also the copies on the Secrets of the Archmages, here's the Sind thread http://secretsofthearchmages.net/Thread ... 045491.htm

Here is the message Havard sent when he came across this and some other stuff viewtopic.php?f=3&t=16450&view=unread#p184285

Oh, I just had a look at the main page, it's going to be offline March 3 ...
Visit the Vaults of Pandius http://pandius.com, the official website for the Dungeons and Dragons setting of Mystara.

Submissions to the Vaults can be made directly to webmaster@pandius.com
Top

It turned out it was just one post that was missing, but it's good to have the whole thing anyway.
If you enjoy my maps, please consider supporting me on Patreon.

Some notes about Thorf's updated map of Sind at 8mph.

The label "Humanoids" in the south-western mountains of Kadesh maybe could be a little more precise, specifying the race of humanoids inhabiting this area. According to my old "Demografia Mystarana", the most numerous humanoid races of the Kurish Massif are ogres, gnolls, and bugbears (the latter in the eastern part of the range, mostly).

Dwarves form a small minority in Sind; they came here after the Glantrian Purge (805 AC), and settled in the "mountains of Nagpuri, Gunjab, Peshmir". Maybe one or two dwarven settlements could be added; the best places are anywhere in Gunjab, the mountain spur between Mahasabad and the Shehid Monastery, and the mountain slopes south-east of Karakandar or Jalbad. Possible names: Khalram, Kog Daral, Dholtaruhm.

Most rivers are without a name. For those located in the north-east, near Lake Hast, I'd use the names of the rivers featured on the westernmost fringe of GAZ3 original map - later superseded by CoM and WotI maps. The small rivers featured there are called Aifa, Kesh, and Dool. The river coming south from the western side of the Adri Varma is called "Black River" in Sturm's map of the plateau: to give it a more Indian flavor, it could be called Kaalee Nadee or Kaalee River. The river of Latehar could be the Lohang, while the two rivers coming down from the Kurish Massif to Karakandar could be the Jheskar and Chenlej rivers. Finally, the two rivers of Pramayama and Bangore could be called Yamdak and Dohibi rivers. (For the names I've meddled into the names of some RW Indian rivers.)

Some names also for the lakes featured inside the Salt Swamp, just in case you'd like to name them: Surajar, Rewashar, Punamkotta, Ansham, and Nachipadra.

Many settlements on the map lack a name. Advising you that I'm not an expert of Hindi language, I'm going to suggest some temptive name for those settlements, having taken some inspiration from RW map of India:

Feel free to use those names or to change them, I just devised them from scratch!

Besides this, probably some more features could be added to the map - old temples, some ruins, rajas' palaces, mausoleums, huge stone statues of Immortals carved into stone, forts (or their ruins) built by the more powerful rulers of the past. Also, a short river or two in the Nagpuri plain, flowing into the Amsorak Lake, would be appropriate - even if in this case the river should then appear also on GAZ11 8mph map of Darokin.
"The prince should study historical accounts of the actions of great men, to see how they conducted themselves in war; he should study the
causes of their victories and defeats, so as to avoid the defeats and imitate the victories" N. Machiavelli, The Prince, XIV, 5
Top

Re: [Outer World] Sind and Jaibul, 8 miles per hex

I've updated the map with almost all of your suggestions, Simone.

The next step is surely to incorporate some of Ignacio Ramos's ideas from Ramelin Mystara. Even though his version of Sind is a bit different, it's not hard to adapt some of his detailing work, which is top notch.
If you enjoy my maps, please consider supporting me on Patreon.