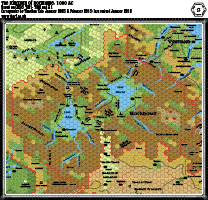 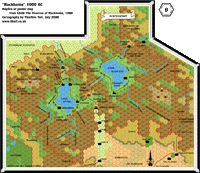 Problems with Rockhome's Rivers
The following is an excerpt from my old Thorf's Secret Project: Stage One thread at the Wizards MMB (20th February 2005):

To break things down:


It looks to me as if there was a lot of confusion around this area. All the rivers can't flow into Lake Klintest, as page 6 of GAZ6 suggests - there has to be a runoff to somewhere. And it makes sense to me for the Klintest River to be the major runoff. Unfortunately, both the rivers described as flowing out of Lake Klintest (page 46 of GAZ6) have sources which make it look very much as if they flow into the river. The other river is the Kur, by the way, which is not actually labelled on the official maps.

The whole issue of Rockhome's rivers is a complete mess.

This was always a confusing issue with me. I have come to use only one outflowing river from Lake Klintest and that being the Hrap River flowing into Ethengar. Having a dual outflow from a body of water is a very unstable situation and not likely to last a long time.

The Kur River isn't even connected to the Vestfjord on the map so I don't even consider that it flows east from the Lake and into the Sea of Dawn.

Whatever is chosen as correct must take into account elevation.
Top

It's possible for all the rivers to flow into (or out of) the lake if there's an inflowing or outflowing portal to the Plane of Water at the bottom!
Top

Update: Added some missing lines to the plateau on the GAZ6 replica maps (PNGs and PDFs).
If you enjoy my maps, please consider supporting me on Patreon.

Just a note on the Evekarr Road thing: There is a possibility that the road on TM1 is shown cutting through the mountains because there may be dwarvish settlements in those mountains that need to be serviced by some sort of road. If it were a human (or non-dwarven community), having the road run alongside the shore of Lake Klintest would be the likeliest route, but with dwarves it doesn't necessarily follow. Just to raise the possibility (though I do agree that Gaz6's version is probably the more correct. I recall Bruce saying they used to put all those symbols and things on the maps by hand, so maybe the TM version just got knocked out of whack a little.)
Moderator of the Mystara and Greyhawk forums. My moderator voice is gray-green.
Top

But I still think the main road would go by the easiest path where there is a choice. Besides, GAZ6 is the priority source.

On the other hand, we can still use your idea for detail maps - in fact we could use both roads, with a side-road leading through the edge of the mountains before rejoining the main road.
If you enjoy my maps, please consider supporting me on Patreon.

Good idea. Like I said, I think your idea is probably the likeliest of the two, but it did occur to me that the alternative I presented might be a rationale for the other route, if you had decided you liked that notion better.

Come to think of it, that might make a more interesting detail map (at least at larger scales): whereas in most nations, you'd find the majority of settlements along the major road through least difficult terrain, on the large scale Rockhome map, that road would have few to no settlements, while the mountainous side path would have a lot. All the other races shake their heads at those nutty backwards dwarves.

Moderator of the Mystara and Greyhawk forums. My moderator voice is gray-green.
Top

Notes on GAZ12
If you enjoy my maps, please consider supporting me on Patreon.

Notes on GAZ6
If you enjoy my maps, please consider supporting me on Patreon.

I've released a new updated map. I referred to the X1/Expert Set Known World map, and concluded that the rivers were joined up incorrectly in GAZ6 and GAZ7; this region is obscured by a label on that map. Landersfjord should obviously flow past Landersfjord as GAZ7 says it does, so I divorced the Klintest River from that river (as is clearly shown on the X1 map), then cut the link to Marsfjord and instead linked it to Landersfjord.

http://mystara.thorfmaps.com/rockhome-8/
If you enjoy my maps, please consider supporting me on Patreon.