Barrik's Vale aka Valley of the Eternal Sun

For the world is hollow, and I have touched the sky.
The Book-House: Find Hollow World products.

Barrik's Vale aka Valley of the Eternal Sun

In AC200, the humanoid hordes were ravagingt he valley of Thunder Rift in the event later remembered as the Goblin Wars. At the time, Duke Barrik was a local human ruler controlling the lands south of Melinir. Right before the Castle of Duke Barrk was about to fall to the massive Goblin forces, the entire castle was swept away by divine forces never to be heard from again in the Outer World of Mystara.

In the Hollow World, Barrik's Castle and its inhabitants reappeared 800 years later. They found themselves in a strange valley surrounded by various creatures and peoples that they had never seen before. They also immediately noticed the strange everburning red sun above them and named their valley the Valley of the Eternal Sun. As they began to explore the valley, Duke Barrik's men encountered Azcans, Milennians and Schattenalfen neighbours. As of AC100, the people of Barrik's Vale are just beginning to discover the larger Hollow World that they are now a part of. 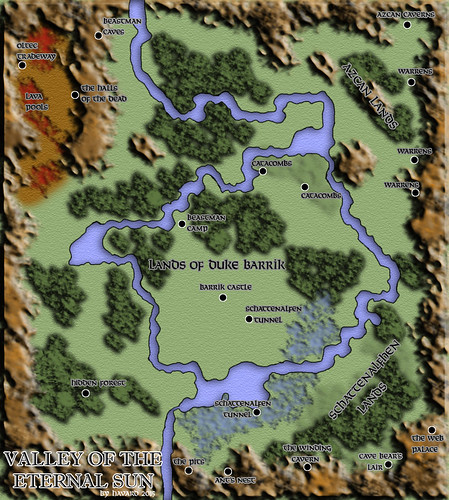 
Would you use Barrik's Vale in your Hollow World Games?


-Havard
Aliases: Håvard Frosta, Havard Blackmoor, Blackmoorian, Dragon Turtle etc
Where to find me on the Web
The Comeback Inn - My Blackmoor Forum
The Blackmoor Blog
THRESHOLD Magazine - The Mystara Fanzine
My Articles at the Vaults of Pandius
Moderator of the Mystara, Blackmoor and Thunder Rift forums.
My moderator voice is GREEN.
Top

Re: Barrik's Vale aka Valley of the Eternal Sun

Yes, I know I'm raising the dead here; but, since this is related to the subject at hand, I thought it would be better to post it here. No sense opening a new thread. What I'm linking should hopefully give everyone a good chuckle...and maybe some head shaking.

https://drive.google.com/open?id=0B9aSh ... 3J4dkFzU0k
I typed it from the point of view of one of my four characters from a run thru of the WotES game.
Top
Post Reply
2 posts • Page 1 of 1