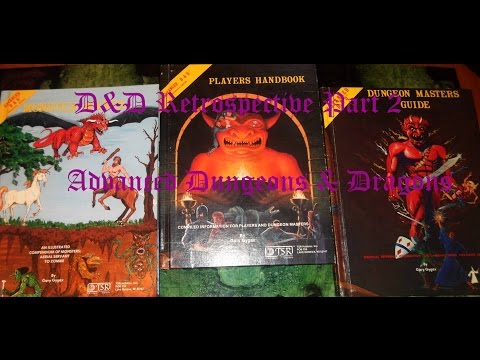 D&D gets Advanced. In this video I discuss the 1st Edition of AD&D as well as events surrounding the game and TSR as a whole

This video doesn't cover the entire AD&D product line (which is a lot bigger than the OD&D product line). Instead it explains the transition from OD&D to AD&D, shows how the modules were a major part of the new changes in D&D and then covers some of the internal and external politics that affected the rising TSR, put it in the red and ultimately led to Gary Gygax being ousted and 2nd Edition AD&D being brought in.

2nd Edition was my doorway into D&D and I didn't really know about any of the weird politics of AD&D until well after the 3rd Edition Era. So there might be some people who are still not aware of that.

It's a shame that Draven didn't cover more of the 1st Edition products (along with the behind the scenes events) as I would have been interested to know how things like Gary's move to the entertainment branch or changes in management might have had an effect on specific D&D products. But it's a pretty good starting point for someone wanting to know what 1e is.
David "Big Mac" Shepheard
Please join The Piazza's Facebook group, The Piazza's Facebook page and follow The Piazza's Twitter feed so that you can stay in touch.
Spelljammer 3E Conversion Project - Spelljammer Wiki - The Spelljammer Image Group.
Moderator of the Spelljammer forum (and administrator). My moderator voice is green.
Top
Post Reply
1 post • Page 1 of 1