A Kickstarter just launched for King of Dungeons, a game based on 13th Age, but with some interesting differences.  Here's a list of a handful of areas that vary from core 13th Age, according to Baz King, the designer:


Baz King wrote: Lethality is broadly on par with core 13A. I do have a different mechanic for hit points and damage output, but it lies along the same maths curve.
Guilds are my name for the 'adventuring party'
Your Guild has it's own stats which are directly related to the stats of the membership. Your Guild can roll for things; typically handled by group rolls in other games. Classic examples would include climbing, perception etc.
The Guild can also accumulate a currency called Bonds, which you get from critical failures (you learn from your mistakes). These can be traded for advantage in future rolls.
There are loads of little quirks and subtle changes alongside bigger ones. Frankly, I couldn't list them all!
As a 13A fan, you'd likely notice the loss of Icons, Backgrounds and Feats. You'd wonder what replaced them and find Alignments, Expertise and condensed maths choices.

The classes included are; warrior, priest, mage, rogue, commander, scholar. They're reskins (sometimes radical ones) of the classes you know. Scholar is the Bard by another name. Every power has been retooled to fit, including Icon specific ones.

Expertise adds a small dice to your d20 roll. It increase with level. Each character has five expertises, and can also call on Guild expertise.

Alignments include; Civilisation, Gods, Magic, Nature, Savagery, Thievery, (un)Death, Villainy and Diabolic.
My alignments don't dictate your behaviour. They give you an expertise related to the concept. It's a different take on Icons.
I use a lot of terminology that probably doesn't mean exactly what the veteran gamer might think it means. It requires a fresh perspective. It's worth it though.

Re: King of Dungeons Kickstarter

There's a rules preview available in the latest Kickstarter update.

There's also an art preview that provides this example: 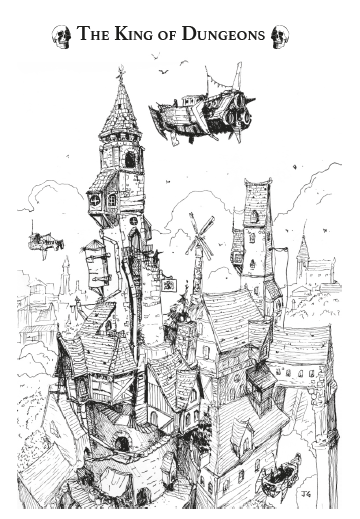