The first Warcraft game was Warcraft: Orcs and Humans: 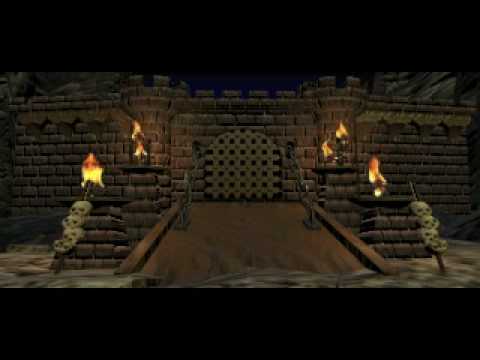 I looked and Wowpedia has this awesome old school looking map of Warcraft: Orc & Humans. 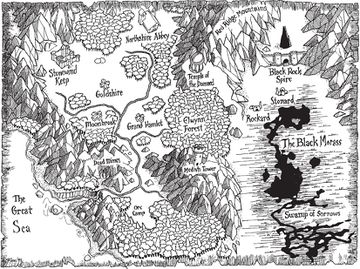 Wowpedia also says there are 12 Warcarft Orcs & Humans Missions for each race (so 24 in total).

Human Campaign Orc Campaign Has anyone thought of using either the Human Missions or the Orc Missions as the basis for a RPG campaign?

Do you think it would be possible to use both sets of missions at the same time, with something like the Social Collapse Points system, from Night Below being used to decide if the enemy are able to advance, while the PCs side is advancing (if the PCs are not up against the enemy)?

For example the 4th Mission for both sides is "The Dead Mines", so those two groups could both try to explore The Deadmines at the same time. That could give you extra NPCs to deal with.

I'm not too sure how the two opposing adventure paths would fit together, but it could create a sense of the world changing around the PCs if they were off adventuring and orc adventure parties were doing the same thing.

It looks like there is an entire war there, with both the campaigns ending with the other side being totally defeated. It's probably not going to be possible to do both endings together, but if the Social Collapse System came into play, that could be used to allow the PCs to decrease the victories of the other side. So maybe the two sides of the campaign could be influenced by the PCs, even though they might not be dealing with the opposing party of NPCs directly.

It does look like The Deadlands would be a great opportunity for the PCs to directly or indirectly encounter enemy NPCs who get away. (If they kill some NPCs, then the GM can swap them out for whichever ones escape. So whoever the PCs kill turn out to be high placed minions. Maybe the GM can keep it all a bit vague before Mission 4: The Deadmines...and allow the PCs to come to the conclusion of who is working against them, for themselves.) The opposing group could leave behind some sort of sign, every time they carry out one of their NPC missions. And that could be a way to make it personal.

Considering how it was supposed to be a Warhammer Fantasy license game, I'm curious how well it could be handled within WFRPG or Warhammer proper!

All the same, revisiting Warcraft in its earlier days would be a great blast of nostalgia.
Follow my delves into madness via the Daemons & Deathrays blog!
Top

Doc Necrotic wrote: ↑
Wed Feb 05, 2020 7:09 am
Considering how it was supposed to be a Warhammer Fantasy license game, I'm curious how well it could be handled within WFRPG or Warhammer proper!

Wow! I've never heard that before. I created a Warcraft as a Warhammer game? topic, rather than derail this one with a zillion questions.


Doc Necrotic wrote: ↑
Wed Feb 05, 2020 7:09 am
All the same, revisiting Warcraft in its earlier days would be a great blast of nostalgia.

I never played the Warcraft: Orcs & Humans game, but there are a lot of videos out there. I figured it would be a much more simplified plot.

I think it is set before World of Warcraft, so might work as if it was an "AD&D forerunner to the later Warcraft roleplaying game" from a lore point of view.

I saw something about some elements of Warcraft: Orcs & Humans being reconnected by later lore. I wouldn't be against that. And the MMO might have better floorplans of buildings, that might be extractable from some of the many websites that put up maps of where to find stuff that drops.

It sounds like Stormwind might have been destroyed during this game (or a later computer game) and then rebuilt for World of Warcraft.

I think I would need to work out what was retconned (or changed by world-changing events after Warcraft: Orcs & Humans so that I could avoid making schoolboy errors.

But that aside, I think it might be fun to compare pairs of the missions in the Human Campaign and Orc Campaign, to see how much interaction the PCs would have with the GMs team of "anti-PC NPCs" who are to become their rivals.

I think that, with a bit of care, an atmosphere similar to the movie, Enemy at the Gates could be built up, where the PCs eventually decide that they need to hunt down and take out their elite opposition.
David "Big Mac" Shepheard
Please join The Piazza's Facebook group, The Piazza's Facebook page and follow The Piazza's Twitter feed so that you can stay in touch.
Spelljammer 3E Conversion Project - Spelljammer Wiki - The Spelljammer Image Group.
Moderator of the Spelljammer forum (and administrator). My moderator voice is green.
Top

The intention with my "Clash on the Borderlands" campaigns is that the characters would eventually get involved in the events of the First War, possibly even taking the role of important characters like Ogrim Doomhammer and Anduin Lothar. That campaign is however strictly in the planning phase and I'm not sure even what system it will be.
Top

Lord Zack wrote: ↑
Wed Feb 05, 2020 5:25 pm
The intention with my "Clash on the Borderlands" campaigns is that the characters would eventually get involved in the events of the First War, possibly even taking the role of important characters like Ogrim Doomhammer and Anduin Lothar. That campaign is however strictly in the planning phase and I'm not sure even what system it will be.

Clash on the Borderlands is a good name. (It's better than Orcs and Humans.)

I made it up based on the region from the game known as the Borderlands.
Top
Post Reply
6 posts • Page 1 of 1

Return to “World of Warcraft”