The Duchy of Lygol
Domains of Pelinore 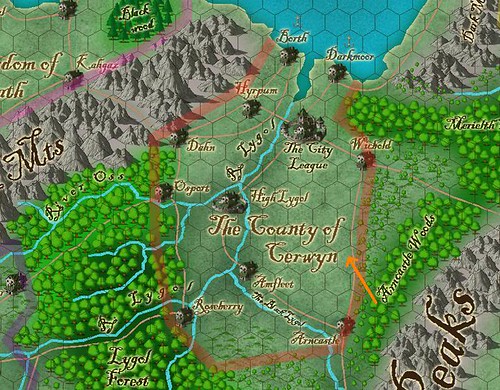 Pelinore.org wrote:
From the pen of Benvecula Scristos, Rotemaster of Heralds recording at the Court of Flavus d’Erebia Gore Barnabus Micreta the Usurper, First Duke of Lygol, Twenty Fourth Count of Cerwyn, Count of Bereduth, Baron of Kalos and Steward of the Mines, this day of Midsummer’s Eve, the 1st day of the 1st year of the Duchy (the 331st year of the County of Cerwyn).

So it is accomplished. Today marks the self coronation of Flavus Barnabus the Usurper as the First Duke of Lygol, following a campaign of political manoeuvre, assassination and conquest that has spanned the previous fourteen years. The Duchy has been born of blood, ripped from the belly of its dying mother state – the County of Cerwyn – and is mewling like a new born child for the nursing of its surrogate mother – the City League.

For, indeed, but for the political and material support of the Katar of that great city, it would not have been possible for the Duke to have achieved his title. Nevertheless, the Katar’s support has come at a price: the agriculture of the County is in ruins; famine and disease are rife; and the silver mines of Osport have been exhausted of their richness. It must be said, however, that the Katar has awoken a sleeping dragon: the Duke is greedy and still even more ambitious. He has ordered the miners at Osport to dig deeper in search of new veins in the silver mines, he has increased taxes on his already impoverished subjects, he demands more tithes from his vassal fiefs and he hungrily turns his eyes on the coffers of the Katar himself. The Katar must suspect that the Duke intends to besiege the City. The Duke has committed what little remains of the wealth of his domain to the retention of humanoid mercenaries from the surrounding wildernesses and the Katar has ordered that the gates of the City are barred both against a steady stream of refugees and the impending onslaught of the Duchy of Lygol.

Pelinore.org wrote:The Duchy of Lygol: The Duchy is comprised of three separate domains that, until recently, were independent of each other but have been united by force under Flavus Barnabus the Usurper, Count of Cerwyn and self titled Duke of Lygol:

The County of Cerwyn: The home territory of the Flavus Barnabus, Cerwyn lies at the Northern end of the Lygol Valley to the West of the Sarpath Peaks and once boasted the most fertile farmland in the Domains. The former prosperity of the County was owed to its previously close relationship with the City League, where Cerwyn would trade its crops, fine wines and livestock. What is more, the title of Count of Cerwyn also carried with it the title Steward of the Mines; indicating that the Count also benefitted from the income from the rich silver mines near the town of Osport on Cerwyn’s Western border with the Kahgaz Mountains. Due to the ambitions of Flavus Barnabus, however, the County has seen a serious decline in its prosperity, its former wealth having been exhausted to fund the long standing military and political campaigns to unite Cerwyn with Kalos and Bereduth. Disease, famine and pestilence now blight the County and the silver mines have been all but stripped of their riches.

The County of Bereduth: To the South of Cerwyn, higher up the Lygol Valley and on the far side of the dark and dangerous Lygol Forest, lies the County of Bereduth; another of the Domains whose title has been usurped by Flavus Barnabus. Much older and less prosperous than Cerwyn, Bereduth has struggled throughout its history against incursions from humanoid and giant aggressors from the mountain ranges to the East and West, and the wilderness to the South. By the time Bereduth grew to a sizable domain of note, Cerwyn had already established itself to the North and thus the further growth of Bereduth was stunted.

The Barony of Kalos: The Barony of Kalos, to the East of Cerwyn and lying at the Northern extremes of the Sarpath Peaks, broke away from the Province Palatinate of Kosre over 200 years ago, under Hellis Huldoa. Following its secession, the Barony enjoyed prosperity under the House of Kalos despite frequent outbreaks of hostility with its former Kosrean masters. The independence of Kalos was relatively short lived, however, the title of Baron recently having been claimed by Flavus Barnabus.

-Havard
Last edited by Havard on Thu Dec 10, 2015 3:15 pm, edited 4 times in total.
Aliases: Håvard Frosta, Havard Blackmoor, Blackmoorian, Dragon Turtle etc
Where to find me on the Web
The Comeback Inn - My Blackmoor Forum
The Blackmoor Blog
THRESHOLD Magazine - The Mystara Fanzine
My Articles at the Vaults of Pandius
Moderator of the Mystara, Blackmoor and Thunder Rift forums.
My moderator voice is GREEN.
Top

-Havard
Aliases: Håvard Frosta, Havard Blackmoor, Blackmoorian, Dragon Turtle etc
Where to find me on the Web
The Comeback Inn - My Blackmoor Forum
The Blackmoor Blog
THRESHOLD Magazine - The Mystara Fanzine
My Articles at the Vaults of Pandius
Moderator of the Mystara, Blackmoor and Thunder Rift forums.
My moderator voice is GREEN.
Top
Post Reply
2 posts • Page 1 of 1