The Principality and Kingdom of Korrath 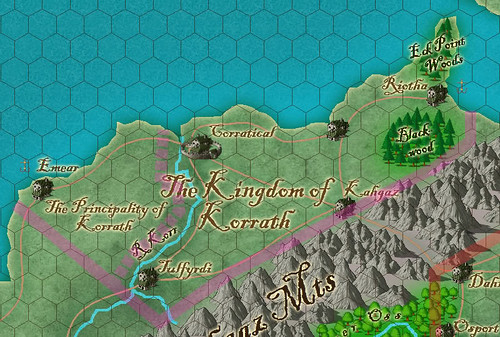 To the West of Cerwyn, connected only by a mountain pass through the Kahgaz Mountains, lie the Kingdom and the Principality of Korrath.

The system has ensured stable government under the same family, the House Vos Ambry, for more than 500 years. Provision is made for the monarch to be well schooled in the theory of politics and rulership, while the High Lord has the practical experience and cannot cause too much harm while learning the ropes of government.

The two halves of Korrath have different coinage and legal systems, but a unified feudal army and fiscal policy. All taxes go to the Royal Treasury at Corratical.

In the last 25 years since Flavus Barnabus became Count of Cerwyn, and more recently the Duke of Lygol, the current King Borutes I has offered safe haven and sanctuary to the noble families from Cerwyn, Berduth and Kalos who were dispossessed of their lands and titles. Many of these noblemen and women have entered into the service of the Korrath Army under High Lord Verantian, where they learn the values of chivalry and honour and prepare themselves for the day when Flavus Barnabus can be removed from his place as Count of Cerwyn and Duke of Lygol. Diplomats from the Royal Courts of Korrath have been sent out to the neighbouring domains of the City League, Poritas, Kosre and the Cammarus See to garner support against the Duke. It is for these reasons that travellers who come eastwards through the Kahgaz pass are less than welcome in the Duchy of Lygol.

Related Links -Havard
Aliases: Håvard Frosta, Havard Blackmoor, Blackmoorian, Dragon Turtle etc
Where to find me on the Web
The Comeback Inn - My Blackmoor Forum
The Blackmoor Blog
THRESHOLD Magazine - The Mystara Fanzine
My Articles at the Vaults of Pandius
Moderator of the Mystara, Blackmoor and Thunder Rift forums.
My moderator voice is GREEN.
Top
Post Reply
1 post • Page 1 of 1