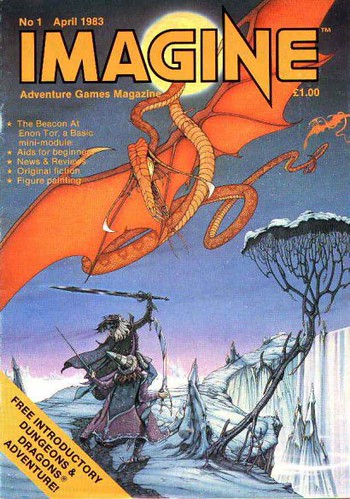 Imagine Magazine #1 published by TSR Hobbies (UK) Ltd April 1983
ISSN 0264-1399
Imagine Magazine Issue 1 features:
Three pages devoted to the new player, including Roger Musson's tips on getting the most out of the D&D game.
QB-161-01: Antares. This exciting science-fantasy short story by John E. Black is complete in this issue. Is this what role-playing will be like in the far future? While Cowin is adventuring in the dream world of Antares, his wife is plotting his real life death.
The Beacon at Enon-Tor. A new D&D mini-module set in a wizard's laboratory. An exciting adventure for 4 players.
Players Association News. PAN now lives within the pages of IMAGINE magazine, with its regular features and special offers for PA members, and, of course, Rubic of Moggedon.
Cartoon adventure - the quest for the Sword of Alabron. Our hapless adventurers set off to find the legendary Sword of Law.
Credits
Editor ........................ Keith Thomson
Assistant Editor ......... Paul Cockburn
Editorial Assistant ..... Kim Daniel
Art Supervisor ........... Philip Kaye
Contributing artists ...
Rodney Matthews Philip Kaye
Ian Williamson Tanya Long
Jeremy Goodwin Dani Kaye
Geoff Wingate Pete Young
Simon Senior
Contents
Foreword
By E. Gary Gygax and Don Turnbull.
The Beginners' Guide to Role Playing Games
A feature for the new player, with Nic Novice.
The article itself describes a game session being played out by Sue (the Dungeon Master), Jon (playing Brumhold, a fighter), Anne (playing Jolinda, a cleric), Terry (playing Lemmy, a thief) and Alan (playing Sarak, a magic-user). The party explore a dungeon and do battle with six goblins.

The article is accompanied by a comic strip, the Adventures of Nic Novice, by Jim Bambra and Paul Ruiz (the pseudonym of Geoff Wingate); wherein Nic is faced by a bewildering assortment of games in his local games shop.

Stirge Corner
A guide for the inexperienced player, by Roger Musson.
Roger Musson reflects on his earliest sight of the rules for the original D&D game and how bewildering he found them. He goes on to explain the differences between role playing games and regular board games.

QB-161-01: Antares
Original science-fantasy fiction, by John E. Black.
Is this what role-playing will be like in the far future? While Cowin is adventuring in the dream world of Antares, his wife is plotting his real life death.

News from the world of games.
This half-page article opens with an announcement of the arrival of Fantasy Games Unlimited's 'role-playing board game' STAR EXPLORER and a new adventure and campaign starter for FGUs AFTERMATH game entitled OPERATION MORPHEUS. It closes with sundry announcements of products to come from Flying Buffalo (DOMACLES/BRIDGETAKERS, a MORROW PROJECT scenario) and FASA (a new game called BEHIND ENEMY LINES and its adventures GUNS OF NAVARONE and BRITISH COMMANDOES).

One would be surprised to read in this article that the staffers at TSR Hobbies (UK) Ltd aren't as up to date on its parent company's releases as one one would expect. The article announces that the following products are soon to hit the shelves in the UK: I2 TOMB OF THE LIZARD KING, SF2 STARSPAWN OF VOLTURNUS, UK1 BEYOND THE CRYSTAL CAVE, M1 BLIZZARD PASS, I3 PHAROAH and I4 OASIS OF THE WHITE PALM. The release schedule is unconfirmed, however, and the reader is warned that the latest news is based on known facts from the end of January 1983 - that is three months before this issue's publication.

Book Reviews
By David Pringle.
David Pringle reviews the following titles: Myths of the Near Future, by J.G. Ballard; In Virconium, by M. John Harrison; The Fifth Head of Cerberus, by Gene Wolfe; The Science in Science Fiction, edited by Peter Nicholls with contributions from David Langford and Brian Stableford; What is Dungeons and Dragons? by John Butterfield, David Honigman and Philip Parker; and Ian Livingstone's Dicing with Dragons: An Intoduction to Role-Playing Games.

Illusionary Script
Challenging mindbenders.
A collection of riddles and puzzles, such as:

The above example isn't the best of the bunch, but some of the other puzzles in this article could certainly be used in any gaming session as a challenge to your players other than rolling dice to hit.

The Beacon at Enon-Tor
A beginners' introductory Basic D&D mini-module for 4-7 1st level characters, by Mike Brunton.
Without giving too much away about the content or plot of this adventure, the action concerns the exploration of a wizard's laboratory near the town of Borth. We don't find out until issue 25 of Imagine Magazine that Borth is located in Pelinore. Nevertheless, the adventure works most splendidly as a stand alone. A conversion for made for Castles and Crusades game can be found at:

The following features were included in Imagine:

PAN Pipings - the editorial section of PAN.
Turnbull Talking - the views of Don Turnbull, co-founder of TSR Hobbies (UK) Ltd. In this issue, Don Turnbull discusses some of the fallacies perpetuated in the British media about our favourite hobby.
Dispel Confusion - questions and answers on D&D, AD&D and STAR FRONTIERS. In this issue we are informed that Dralasites (one of the PC races in STAR FRONTIERS) arecolour-blind.
Rubic of Moggedon - a comic strip produced by Runic Press International. In this issue, Rubic dons his armour.
Tavern Talk
By Pete Tamlyn.
Pete Tamlyn introduces the premise behind this regular feature: that it is to be about news-worthy gossip picked up from the amateur side of the gaming hobby.

Figure Painting
Tips on how to get thee best results from your figures, by Mike Brunton.
This article, the first of two, discusses painting equipment, preparation and painting faces, hands and bodies.

Letters, Fanzine Reviews, Club News and Forthcoming Events
A miscellany.
The Sword of Alabron
Cartoon adventure by Ian Williamson.
Part one: Enter the Dungeon; in which we are introduced to Reg the Crusader, paladin; Dexys, thief; Nightswift, magic-user; and a Scottish dwarf called ... Auchter. A brawl with goblins ensues.


Back to Imagine Magazine

-Havard
Aliases: Håvard Frosta, Havard Blackmoor, Blackmoorian, Dragon Turtle etc
Where to find me on the Web
The Comeback Inn - My Blackmoor Forum
The Blackmoor Blog
THRESHOLD Magazine - The Mystara Fanzine
My Articles at the Vaults of Pandius
Moderator of the Mystara, Blackmoor and Thunder Rift forums.
My moderator voice is GREEN.
Top
Post Reply
1 post • Page 1 of 1