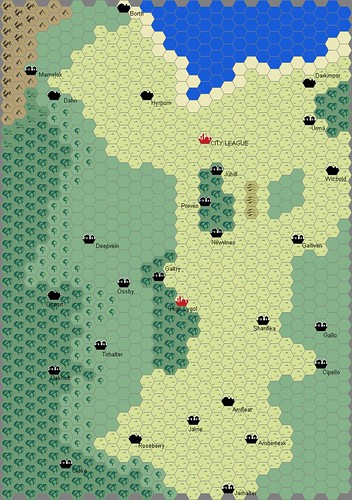 Pelinore.org wrote:The home territory of the Flavus Barnabus, Cerwyn lies at the Northern end of the Lygol Valley to the West of the Sarpath Peaks and once boasted the most fertile farmland in the Domains. The former prosperity of the County was owed to its previously close relationship with the City League, where Cerwyn would trade its crops, fine wines and livestock. What is more, the title of Count of Cerwyn also carried with it the title Steward of the Mines; indicating that the Count also benefitted from the income from the rich silver mines near the town of Osport on Cerwyn’s Western border with the Kahgaz Mountains. Due to the ambitions of Flavus Barnabus, however, the County has seen a serious decline in its prosperity, its former wealth having been exhausted to fund the long standing military and political campaigns to unite Cerwyn with Kalos and Bereduth. Disease, famine and pestilence now blight the County and the silver mines have been all but stripped of their riches.

Adventures in Cerwyn Other links: -Havard
Aliases: Håvard Frosta, Havard Blackmoor, Blackmoorian, Dragon Turtle etc
Where to find me on the Web
The Comeback Inn - My Blackmoor Forum
The Blackmoor Blog
THRESHOLD Magazine - The Mystara Fanzine
My Articles at the Vaults of Pandius
Moderator of the Mystara, Blackmoor and Thunder Rift forums.
My moderator voice is GREEN.
Top
Post Reply
1 post • Page 1 of 1