Hi everyone, I wanted to let RPG players know of a new home brewed post-apocalyptic campaign being launched on Kickstarter today. Its called DOOMSDAY and is from the creator of the Exterminator encounter for the original Gamma World (See Dragon #104). The campaign will work with any role playing system, including all versions of Gamma World, and features full color player's guide with original artwork, beautifully illustrated maps, high-quality monster tokens and a thrilling nonlinear adventure.

You can check out the actual project here: http://www.kickstarter.com/projects/1149163348/doomsday

There are whispers of new horrors in the night: menacing shadows, blood-curdling screams, and startling tales of a strange phantom pleading for help but terrifying to look upon.

A new threat grows on the horizon; fear hangs in the air.

Will you dare journey to “ground zero” — a remote village in Switzerland where the Large Hadron Collider lies 300 feet beneath dirt and rock — to learn the truth behind the apocalypse and stop a new terror from rising?

DOOMSDAY is an Apocalypse™ adventure pack that launches you on a journey to Switzerland to uncover what really happened at the Large Hadron Collider and prevent an ancient threat from destroying the world anew.

• Stand on the threshold of the Field of Fissures spanning miles of moonlit prairie
• Pilot the Gulfstream X9 at Mach 2 through unimaginable dangers
• Gaze upon the legendary Spear of Artemis said to forever protect the innocent
• Survive the ever-changing vortex of mutant monstrosities
• Learn what really happened at the LHC on Doomsday and what is happening there now!

At first glance, I'm not sure about the project. Only "giant bats with electric tentacles that control lightning" really sounds interesting. At $48 buy-in and no cheap pdf option, it seems like a hard sell. They don't show any material or talk about what it will contain in the video. They don't mention how creature stats would be done. Are they general descriptions or using the format of one version of gamma world? The LHC connection and talk of counters lead me to think it is geared towards the most recent version.
Dennis Payne -- Identical Games

Thanks for asking the questions. The DOOMSDAY adventure pack contains a full color player's guide with original artwork, 8 beautifully illustrated poster maps, 2 sheets of high-quality monster tokens, and experimentation and salvage charts. The creatures are presented with detailed general descriptions along with a relative value system so that balance of play is preserved regardless of role playing system. The adventure is role playing system neutral. While the story arc does revolve around the LHC we wanted to center our story more around a conventional radioactive cataclysmic event and a little less about alternate realities mashed together. We also wanted to present a balance that would please the more serious minded gamers with the more light-hearted gamers. We had seriously considered miniatures but in the end we were not happy with the cost. Maybe something for the future if there is interest. The adventure will ship in classic gatefold style of old but don't expect staples. It will have the look and feel of a high quality and personalized portfolio. Cheers! 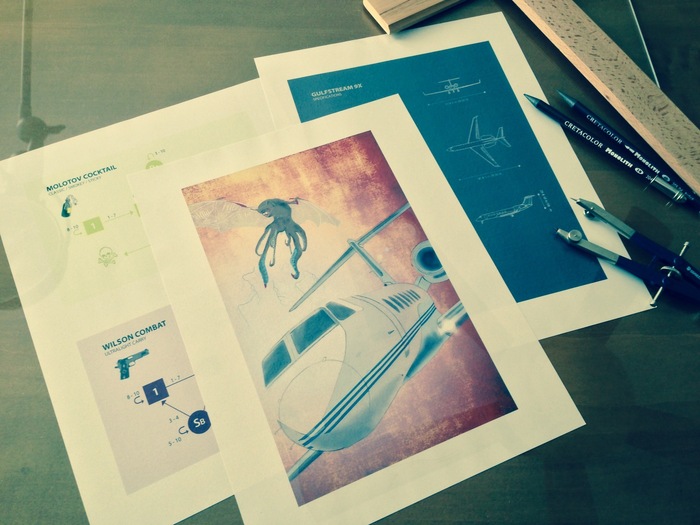 So you are John Mau? You should put up an example of how you intend to do monsters. I think it would help people decide on the project. Maybe show what one of the poster maps will look like or even just a section if you want to keep it hidden. In either case, I posted on the mutant future forum at goblinoidgames.com. Maybe that can get you some backers.

Did you ever use the Exterminator in your GW games? Did the players ever discover their purpose?
Dennis Payne -- Identical Games

I am John Mau. The one and only!

Those are some good suggestions ... maybe I will do that when I return home. I honestly thought there would be more interest. So either I'm not reaching the right places or the campaign is not compelling enough. Hopefully more people will hear of it and pledge over the coming holiday.

Yeah, I definitely used the Exterminator in previous games. Its always a blast if you like Terminators. I saw it used years ago at Gen Con ... the GM chose a name at random at the start of the game and then the Exterminator hounded that character til the end. It was awesome and almost took the dudes life! Eventually, some of the other players chose to help him out and they staged a successful ambush. The Exterminator was the highlight of the game though, overshadowing the actual adventure. It was really fun to watch.

You know, people ask me about the purpose of the Exterminators a lot. My friend, Bri, and I never really addressed this beyond what is written in the original encounter. But for my part, I always had very specific ideas about it. I'm not sure I want to say anything now as I have been thinking of creating a follow-up. People seem more interested in this than my new campaign?! I will say two things though: first, the vaults were always way more important than the original encounter suggests, and second back then I was really fascinated by the idea of "mind uploading" which---thanks to some intense research at Harvard---is more popularly known today as "Whole Brain Emulation (WBE).

Do you think there are still a lot of actual players of Gamma World out there? Sometimes I wonder if WotC lost a lot of people with the latest version. My 9 year old son loves the craziness of it but I have to say I was always drawn to a more authentic or serious approach.

Thanks for mentioning DOOMSDAY at Goblinoid Games ... I appreciate it!
Top

jm001 wrote:Do you think there are still a lot of actual players of Gamma World out there? Sometimes I wonder if WotC lost a lot of people with the latest version. My 9 year old son loves the craziness of it but I have to say I was always drawn to a more authentic or serious approach.

I think there is a significant number of fans of Gamma World out there. I do think the latest version didn't really expand the base much. I think it attracted some new people but most older players didn't seem to like it. The Warlords of the Apocalypse had a lot of interest (and people are hopeful with Super Genius Games taking over). Skirmisher continues to release many small Mutant Future releases.

I don't know if there is a lot of interest in high quality counters/maps like you want to do.

To some degree your project looks risky. Yes you did an article for GW in dragon magazine but you don't recent work in rpgs. On the piazza and WotC forum, you announced your kickstarter but were never involved on the Gamma World forums before. Perhaps engage with the community some, create a blog, do a couple short pdf releases. (Obviously those aren't necessarily doable to help this kickstarter.)
Dennis Payne -- Identical Games

Yeah, I guess I believe there are a lot of Gamma World players out there too and the new version did seem to pull a younger crowd into its base. We'll see how it all turns out. As for DOOMSDAY ...

DOOMSDAY is a fantastic nonlinear adventure---that takes a closer look at the origins of the apocalypse---with gaming elements that will thrill young and old players alike!

BTW - Did you ever play the newest version of James Ward Metamorphoses Alpha? I couldn't find any boards on it here but have always wondered how it plays.
Top

jm001 wrote:BTW - Did you ever play the newest version of James Ward Metamorphoses Alpha? I couldn't find any boards on it here but have always wondered how it plays.

I've generally put thread about it under the Gamma World forum. If there is enough threads we can request a forum but I haven't seen the need.

I haven't gotten the third or fourth editions of Metamorphosis Alpha. It's on my wish list. I'm not sure if I'll get a chance to play it. Although I have every edition of GW, I haven't played it much. The seventh edition game I ran went well but the origins from the later two supplements were clearly more powerful than the first characters which was disappointing. I think that kinda turned people off from the game.
Dennis Payne -- Identical Games

I just visited a Barnes and Noble to pick up a few gifts and I saw a single GW box on the shelf stuffed between a bunch of D&D stuff. It was kind of sad ... but then at least they carried it.

Yeah, I agree the origins are tougher from the expansions ... nothing that can't be easily adjusted to balance out gameplay ... but not sure why they did this in the first place. But then, I'm not sure why they did a lot of what they did with the 7th ed. On the flip side though, the "craziness" of the new edition and the simplicity certainly made it more accessible for a younger audience. I never thought I would be playing GW with my 9 and 6 year old.

What are you playing if not GW? Does Metamorphoses Alpha gameplay feel significantly different from GW or not really?

edit: I see the MA posts from about a year ago below ... I'll read through those and see what everyone thought.
Top

jm001 wrote:What are you playing if not GW? Does Metamorphoses Alpha gameplay feel significantly different from GW or not really?

4th edition D&D mostly. We did a one-shot 7E GW when we didn't have enough of the group able to make it. I ran two one-shot D&D Next playtests. I tried running a 2nd edition Cartoon Action Hour but people couldn't make it. I had an idea for a Star Trek game using Prime Directive but didn't get a lot of interest.

I did try the Dungeon board game with my oldest (five years old). He enjoyed it but didn't grasp the strategy of the game. Cheated a little against the monsters so he didn't lose too much and get frustrated.

I did do a GW/Mutant Future novel for NaNoWriMo 2012. I need to go back and edit it.

The early Metamorphosis Alphas seemed similar to GW in feel although I don't remember if I completely read through them. Reviews of the 3rd edition suggested to me that it had a different tone to it.
Dennis Payne -- Identical Games

Yeah ... 5 years old is pretty young. My six year old plays GW and enjoys it but you're right, you have to keep adjusting/balancing gameplay to keep them from getting frustrated. But it is great to see the boys work out problems together. The biggest threat to these games are of course video games. My 9 year old loves GW but is absolutely obsessed with Minecraft. After this, he is drawn toward various PS3 offerings. Then come the tabletop games of which GW competes with Small World, Memoir 44, Castle Panic. I push for tabletop games because they are good family time. I may try out Metamorphoses Alpha for something different, or some other Sci-Fi RPG.

Let me know if you would be willing to share your GW/MF novel. My boys and I would love to read something like that. Happy holidays!
Top

Sorry your project didn't get funded. I hope you try again or something else at some point. More GW material is good.
Dennis Payne -- Identical Games