[Pelinore.org] The Barony of Kalos

[Pelinore.org] The Barony of Kalos

The Barony of Kalos 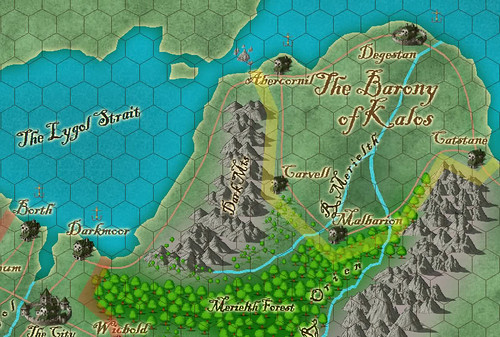 Pelinore.org wrote:The Barony of Kalos, to the East of Cerwyn and lying at the Northern extremes of the Sarpath Peaks, broke away from the Province Palatinate of Kosre over 200 years ago, under Hellis Huldoa. Following its secession, the Barony enjoyed prosperity under the House of Kalos despite frequent outbreaks of hostility with its former Kosrean masters. The independence of Kalos was relatively short lived, however, the title of Baron recently having been claimed by Flavus Barnabus.

Kalos is part of the Duchy of Lygol

Other links:
Aliases: Håvard Frosta, Havard Blackmoor, Blackmoorian, Dragon Turtle etc
Where to find me on the Web
The Comeback Inn - My Blackmoor Forum
The Blackmoor Blog
THRESHOLD Magazine - The Mystara Fanzine
My Articles at the Vaults of Pandius
Moderator of the Mystara, Blackmoor and Thunder Rift forums.
My moderator voice is GREEN.
Top
Post Reply
1 post • Page 1 of 1