Discuss published campaign worlds that do not have a specific forum here.
Post Reply
32 posts

Tim Baker wrote:You may want to include Hellfrost: Land of Fire as its own setting. It's in the same world as Hellfrost, but I'd as different as Al-Qadim is from "Core" Forgotten Realms. It also has its own sub-section on the TAG website.

Good idea! I have added it as a separate "sub entry" under Hellfrost.

I have also updated the initial list with the settings mentioned in this thread.

Study. Party. Save the World.

East Texas University promises prestigious leadership, connected alumnae, the fantastic Southern climate of Pinebox, Texas…and annoying roommates, professors that try to kill you (literally), and things that go bump in the night. Enroll at your own risk.

East Texas University offers a well-rounded syllabus of character creation, new Edges & Hindrances, gear, Setting Rules, and tours of campus and nearby Pinebox, Texas. For advanced credit, read the section on rituals and talismans. Finally, the Adventure Generator and encyclopedia of miscreants is sure to light a creative spark in even the most humorless campus parking enforcement officer. There are generator mechanics for parties and adventures as well as Ritual failure and a little thing we like to call “High Strangeness.”

Can you survive four years of college?

There's the Sixth Gun setting by Pinnacle Entertainment. It's based on the comic series of the same name.

During the darkest days of the Civil War, wicked cutthroats came into possession of six pistols of otherworldly power. In time, the Sixth Gun, the most dangerous of the weapons, vanished.

The First of the Six strikes with ungodly force. The Second spreads Perdition’s flames. The Third kills with a flesh-rotting disease. The Fourth calls up the spirits of those it has slain. The Fifth can heal the wielder from even a fatal wound. And theSixth is the key to rewriting the world.

Discover the secret of The Six—mystical weapons forged by hatred, and oiled in betrayal—in The Sixth Gun roleplaying game. Inside you’ll find details on Cullen Bunn and Brian Hurtt’s incredible world from the Harvey and Eisner Award nominated comic series by the same name. It includes new Edges and Hindrances, guns and gear, Setting Rules, rules for sorcery and voodoo, an Adventure Generator, and a host of nefarious rogues, gadflies, and scoundrels, for one of the wildest Westerns in all of comics!

There's the Pinebox setting by 12 to Midnight. It a stand-alone horror setting, and is compatible with East Texas University. 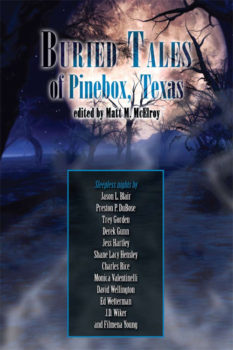 The world we know, our reality, is normal. People go about their daily lives, raising families, going to work and making dinner. Children cry at night, afraid of shadows or the monster under the bed. Parents sooth their children’s fears, saying “There is nothing to be afraid of. There are no monsters.” They are wrong. Our reality is stretched thin, and the veil is torn. Monsters, shadows, demons, devils, spirits, conspiracies, and aliens all exist, hidden from our normal lives. They co-exist with us. Watching us. Using us. Controlling governments. Preying on us. Welcome to Pinebox, a sleepy little East Texas town with more than its share of trouble. Whether it’s snake cultists running the local bar or vengeful spirits haunting the high school boys locker room, there always seems to be some sort of trouble brewing just below the surface.

Here you can find a lot of fan material for various Savage Worlds settings (in Italian): http://savagepediaitalia.wikidot.com/co ... venturefan
I'm the Real Nowhere Man, sitting in my Nowhere Land,
making all my Nowhere plans for Nobody.
Top

More Savage Worlds links (official and fan): https://savagepedia.wikispaces.com/Important+Links
I'm the Real Nowhere Man, sitting in my Nowhere Land,
making all my Nowhere plans for Nobody.
Top

(I acquired the PDF as a backer reward for the Pathfinder FCoA Kickstarter, but haven't read it as I don't play Savage Worlds.)
Tim Emrick, Green Ronin Freebooter and Keeper of the Freeport Errata
Time of the Tarrasque: My homebrew Pathfinder campaign (2017-).
Studded Plate: My blog about RPGs and LEGO.
Thastygliax's Vault: My other gaming pages.
Top
Post Reply
32 posts

Return to “Other Worlds”