What is Magus Mundi? Magus Mundi is a roleplaying game that uses Green Ronin’s Modern AGE system a modified version of Open D6, with added content from the Fantasy AGE companion.

Magus Mundi is a game that takes place in a world close to our own, but slightly different. Through the looking glass, into an Earth of the 1990s where Mages and Magic exist alongside Monsters of Ancient Legend and Cryptids of Modern Lore. All existing just below the surface of a world that is about to have definitive proof that the arcane exists!

But to put a finer point on it, the game takes place just as the Player Characters are learning that there is a magical world just beneath the mundane. The PCs still have day jobs and obligations, family and friends. But they’ve just been thrust into a world they’ve only dreamed about.
Although the game is set in an Urban Fantasy version of Earth, Magus Mundi games are centered in the city of Caledonia, a fictional and deliberately ambiguously placed modern city somewhere in America (or possibly Canada).

The game will take place with the PCs starting as mundane people, unaware of a magical world (totes not cliché), when something happens and they find themselves awakened to the magical world around them, and thrust into a battle they never knew existed. But of course their mundane lives don't go away, so they have to balance their jobs, family and so on against their new abilities. They'll have a mentor, some mystical aid that will help them learn to control and use their new found powers in a war against probably Necromancers!

I'll be posting updates on the setting regularly, and you can look forward to house rules and actual play soon!

Character Creation
Character creation follows the Modern AGE creation rules, save that stats use Option 2 (buying abilities 12 points). The default mode is Gritty, though Conviction Points are in use.

Conviction – Conviction starts and remains at 3, and is regained every session. The GM will sometimes award bonus temporary Conviction during play (but don’t count on it, I hear she’s a bitch). Additionally, Conviction Points may be used to automatically pass a Fatigue roll.

Profession – A player may again roll or choose their character’s Profession.

Magic
Aw yeah! A game called Magus Mundi is bound to have magic in it! Unfortunately for you, you begin play as a Mundane human. But worry not, you’ll get your cool powers soon!

While you don’t start with your magic, a little bit about what the world’s magic is like up front: although magic exists, it is rare. It is both extremely powerful, but somewhat limited. Your characters will gain access to more powers as they level, but the powers are contained along lines and not the kind of magic we see in a lot of TV or movies. Magic is also innate, and not learned through rote and study.

Your character will not begin with magic, but you as a player should know what to expect from the world, so that we’re all on the same page.
Gaming Blog | Twitter | Discord
MAYBE YOU RUIN CHOCOLATE!
Top

Magic and the Mundane World
Unlike many other games that mix magic and modernity, Magus Mundi has no law, no code, no mechanic against using your magic in view of mundane people. Individual Covens may have different bylaws, but there is no ruling council of mages, no backlash of reality, that stops a mage from using their amazing abilities in the open.

There are, however, other repercussions. Openly fighting a mage in public may have societal side effects, and guns are still guns. The world of Magus Mundi is on the brink of change. Soon, smart phones might make magic undeniably a reality. But we’re not there yet, the setting is still a few years off. And though there is no veil or reality bending mind control to make mundanes forget, never underestimate a human’s ability to rationalize away something they don’t want to admit. After all, there are people even now who think the earth is flat…
Gaming Blog | Twitter | Discord
MAYBE YOU RUIN CHOCOLATE!
Top

At first I thought this was a new book!

May be you should add «campaign» in the title of the thread... but then its in the Homebrew World section. I should have looked at that.

It will be a new (fan made and free) book once I get the campaign started!
Gaming Blog | Twitter | Discord
MAYBE YOU RUIN CHOCOLATE!
Top

Sounds interesting. I have always liked this sort of Urban Fantasy type settings. Is there anything else that make this world different from say the Wizarding World of Harry Potter, the world of the Witchcraft RPG or the Dresden Files?

Havard wrote: ↑
Fri Aug 10, 2018 12:11 pm
Is there anything else that make this world different from say the Wizarding World of Harry Potter, the world of the Witchcraft RPG or the Dresden Files?

Well, no one is a British child who goes to a wizards academy and does wacky hijinx

The theme is going to be different than Witchcraft (which is a fun game, but just not what I feel like running right now), wherein the players will belong to much smaller covens, and their magic is (seemingly) randomly dictated (at creation, anyway), and while they are just now (at the beginning of the game) thrust into a world of magic, they will still have mundane obligations like jobs and families. And, well, IDK about Dresden, because I've never read nor played any of it.

I think I can liken it a little closer in media to like The Last Witch Hunter, Secret Circle, the Craft
Gaming Blog | Twitter | Discord
MAYBE YOU RUIN CHOCOLATE!
Top 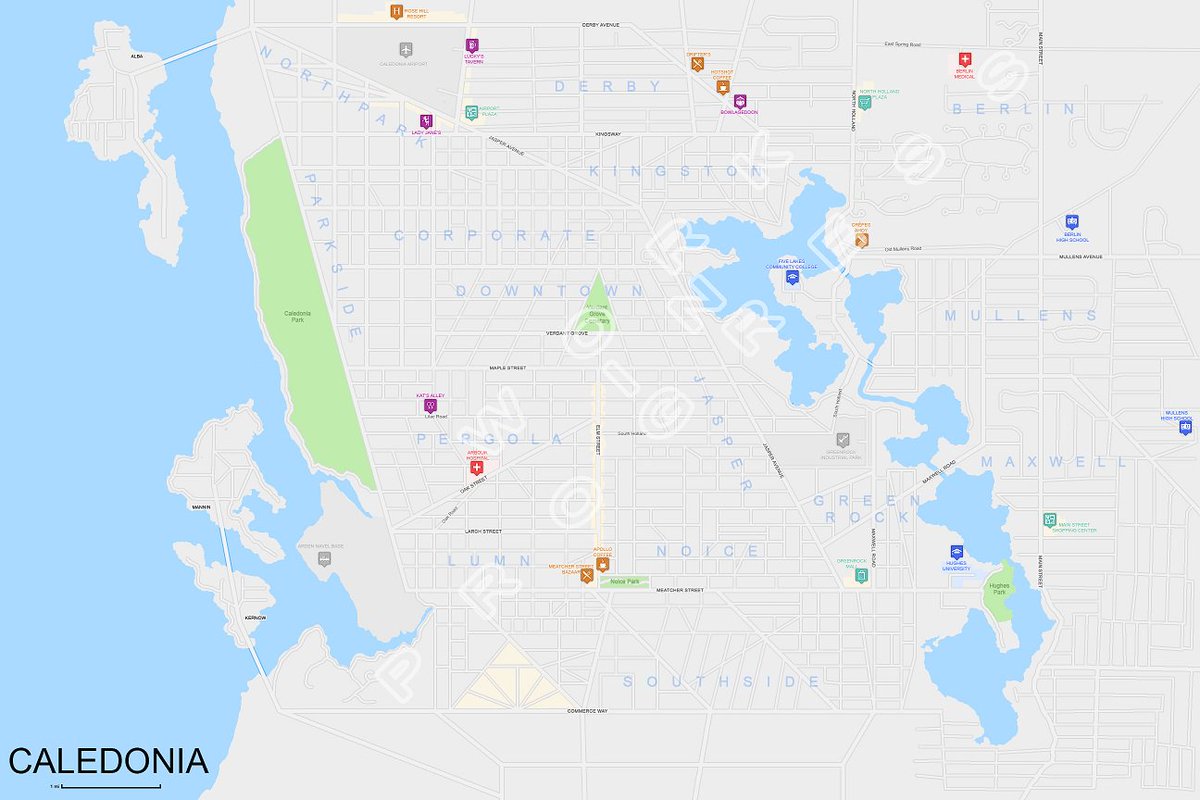 This is a WIP for the city where the game is taking place. My tools are Photoshop and swearing. It's obviously not done yet, but I thought it'd be fun to share the progress. Anyway, I am pretty stoked about the game, so expect more random info dumping

This is a WIP for the city where the game is taking place. My tools are Photoshop and swearing. It's obviously not done yet, but I thought it'd be fun to share the progress. Anyway, I am pretty stoked about the game, so expect more random info dumping

Looks good
I'm surprised you are not using Illustrator for a vectorial map.
Its less of a pain and you can scale the file afterwards without loosing resolution.
Top

I would if I had illustrator, believe me! Hopefully soon, because vectors would make this so much easier
Gaming Blog | Twitter | Discord
MAYBE YOU RUIN CHOCOLATE!
Top

We have our cast of characters! Which means updates will come soon, and that I'll be sharing some more world info soon!

So, without further ado, our main characters are

Dante Edwards is the sole surviving member of his family and the Coven he grew up in. 11 years ago, the cult known as Ordo Necromantis attacked the Coven and murdered Dante's mother, father, brother and his best friend, along with the few other Coven members. Betrayed by one of their own, Dante was spared by a young cultists who whispered "I'm sorry" before leaving him to play dead so he wouldn't get stabbed. He escaped while the mansion the entire Coven was in began burning. Too old for foster care, but too young to be on his own, Dante was taken in by a woman named Lisandra, also the sole survivor of her Coven hit the same night. Dante discovered every Coven in the city, and much of the real estate on the island of Alba, was burned that night. Dante has since become a professional photographer by day (thanks to the encouragement of Lisandra) and a hunter of cultists by night. Will he discover who saved his life? Why the Covens were attacked?

Elizabeth Falls is a corporate career woman working as middle management at Acheron Industries, the largest chemical manufacturer and developer in the greater Caledonia region. Recently, she's found herself increasingly involved in a web of corporate lies and backdoor dealings, and though there's nothing to implicate her just yet, she is not sure when she will find herself used as an unwitting fall guy, or worse, caught up in something she can't get out of. Of course, unbeknownst to her, her life is about to get a little more deadly and a lot more interesting...

Parker Chea is a private investigator working mostly out of Jasper. From a lower class immigrant family from South Korea, Parker has found his niche in investigation and street running, making him good at getting pictures and evidence, but so far he's mostly discovered that the investigating is more about cheating spouses than it is about global conspiracies and secrets hidden beneath the veneer of the mundane world. However, a seemingly run of the mill investigation may just turn something up...

Nicole Farris is a young woman from the neighbourhood of Maxwell. A middle class girl with a middle class life, her aspirations of garage band greatness are actually taking off. Eschewing a degree in something that'll "make her money", she's gone all in on her band and her singing career, fronting as the lead vocalist in her indie rock band. Although she's got some real talent, she and her band haven't gotten that one big break just yet, but there seems to be more than just agents scouting her. Someone with an unnerving stare has been at all her recent shows at Charlie's Place, and those rock star aspirations may have to take a back seat. That is, if she survives the night...
Gaming Blog | Twitter | Discord
MAYBE YOU RUIN CHOCOLATE!
Top

An interesting cast. The higher your rise the further you Fall, Elizabeth !

My Husbutch's current progress on Tegan, a character from Magus Mundi!

Third recap is finally up!

The link is broken. It says you erased your blog.
Top

The link is broken. It says you erased your blog.