The Northern Reaches, 8 miles per hex by Thorf 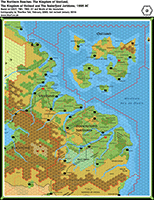 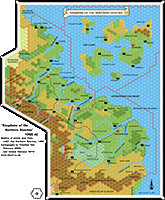 I'm sorry to add more to your list Thorf, but the maps in X3 have Rhoona on a point where two rivers seperate. If Rhoona was moved 1 hex northeast on the maps it would solve this problem. I don't have access to any other canon maps (other than X3), but I figured I would point this out.

The Rhoona one is probably best fixed by moving it as you suggest, although a case could be made for the river splitting off into tributaries on a larger scale map of Rhoona (and thus, not visible on the 8 mile/hex map).

The X13 map is a bigger issue for mapping. The coastline is different in some areas, and IIRC, the hexes are even aligned differently (always a headache). Plus there are some spots on there that don't show up on the Gaz7 map (Stones of Sky, Ruthinian Monastery- not to mention all the little baronies, duchies, counties that X13 mentions that got completely dropped/ignored for Gaz7. I personally prefer the tidbits from X13 to the vanilla Viking Vestland from Gaz7, but in any event- there are some definite questions about how to handle them.)\

Which reminds me- I'll check my Dungeon magazines- I know at least one of them has an adventure set in Soderfjord. I'll try and find some details. Plus, there might be some more details from the adventures in Gaz7- in particular, Otkel's Stead.
Moderator of the Mystara and Greyhawk forums. My moderator voice is gray-green.

I could have sworn someone had already mentioned this in these forums, but since I just came across it in my old mapping thread, I'll leave a note here anyway:

Add the Sodervirk wall south of Whiteheart.
If you enjoy my maps, please consider supporting me on Patreon.

Thorf wrote:I could have sworn someone had already mentioned this in these forums, but since I just came across it in my old mapping thread, I'll leave a note here anyway:

I think I mentioned it on the Wizards forums long ago, but not sure.

Also the Vineyard Vales could be added (the strip of non-clanheld land between Whiteheart and the Great Marsh in Soderfjord)- from Dungeon Magazine (can't recall the issue no. offhand- just looked through it the other day).

The Stones of Sky and Ruthinian monastery and Isle of the Seawitch from X13.
Moderator of the Mystara and Greyhawk forums. My moderator voice is gray-green.

Thorf wrote:Ostland Dominions – the dominion map for Ostland in GAZ7’s DM’s Book is not labelled, so it is impossible to tell which dominion name goes with which dominion. Dominions with towns are noted in the text, so those are known. The others marked in this atlas are educated guesses, based on the order in which the dominions are listed in GAZ7.

I just bought a copy of GAZ7, and I noticed that the Ostland map does have numbers. The version scanned for the PDF didn't. Most likely they left them out by mistake in the initial printing but fixed it in later printings; the PDF shows an early printing, while the version I just bought must be a later one.

In any case, it seems that I had all the labels right except for Kalsloviki and Oland on Kalslo Island, which I had the wrong way round. I'll fix this in the next update.
If you enjoy my maps, please consider supporting me on Patreon.

A suggested add-on to your (as always) beautiful map: the lost dwarven city of Darmouk, from the second book of the Dragonlord Trilogy

The exact location is not given in the book, but I think it could be roughly deduced from its description. Here are the quotes from Dragonking of Mystara related to the city:

...he descended quickly from a high pass in the eastern mountains of Rockhome, just above the cool, wet lowlands of the Northern Reaches... The land belonged to the greatest of all the renegade kings (of dragons)... The sourrounding mountains were steep, stark, and barren, all the same dull gray-brown in color. They descended into a great valley, shaped like a long oval basin set amid the mountains, filled with dense woods of tall pines with short, sparse branches that somehow always appeared wet and forlorn, as if they had just endured a terrible storm. In the very center of the valley, almost completely surrounded by a cluster of lakes of still, oily-looking water, stood a short, saw-toothed ridge of dark stone that resembled the plates of a dragon's crest...
...Although the desolate land seemed to have remained empty and silent since the beginning of time, a forgotten city of the ancestors of the dwarves lay somewhere beneath the ridge.

The forgotten city was not hollowed out from the great ridge of stone rising from the center of the valley, but instead it was far below... Some called it Darmouk, the ruins of the last surviving city of the dwarves after the fall of Blackmoor. The dwarves themselves believed that Kagyar had created their race to cope with the new world created by the Rain of Fire.
The entrance spiraled down into the dephts... The entrance passage opened at last into a series of large chambers that once served as the final line of defense against invasion, and these in turn opened into the immense main chamber of Darmouk itself...
The main chamber of Darmouk was so vast that it made even the caverns of Dengar seem small in comparison. Unlike Dengar, it wasn't a natural cavern but a single, immense, carved chamber, perfectly oval in shape, five miles in lenght, and more than two miles wide. The ceiling rose more than four hundred yards above the terraced floors. Great arches of white stone supported the curved dome of the ceiling. Even as formidable as this underground city was, the great destruction of the Great Rain of Fire nearly ruined it. The tall, graceful building had mostly collapsed in wreckage during the fall of Blackmoor, and two large portions of the ceiling had collapsed when the supporting beams failed, crushing large parts of the city beneath landslides of stone.

Given the fact that the artificial dome above Darmouk is quite big (5x2 miles) then the stone ridge above it would be some 5 miles long, too. For this reason the great oval basin sourronding it would be a major feature of the land, definitely something that is clearly visible in a 8 mi/hex map.
Considering that the oval basin is visible not very far from the eastern Rockhome border, and that the area is definitely wet, I would say that the basin itself is the western half of the Great Marsh, and that Darmouk lies somewhere near the letter "R" of the word "Great" in the maps above.

Anyway, these are just my speculations

For some reason, I had the same thought (about it being underneath the Great Marsh somewhere). I thought I recalled the description mentioning marshland around it, but it doesn't seem to be the case from the description you posted.
Moderator of the Mystara and Greyhawk forums. My moderator voice is gray-green.

The following was an edit in one of the above posts, but I think it may have gotten lost, so I'm moving it here...

The Sodervirk Wall is supposed to stretch about 30 miles along the eastern edge of the Whiteheart Valley. I'm thinking it would make the most sense to mark it as shielding the town of Whiteheart from the surrounding hills, but another approach would be to put it due east of Whiteheart, between the town and the map label for Gnollheim. Any preferences?

Also, there are at least two wall symbols to play with: the Alphatia map's row of diamonds (the simpler symbol), and the Renardy map's angular line (the bigger, slightly more complex symbol). Which one do you prefer?

I have to say, I dislike the way those books deal with Blackmoor, as if it just happened within recent history and is well known, rather than happening 4000 years ago and being mythical even among those few scholars who know anything at all about it. Yes, having old dragons and elves around could potentially change that a bit, but time is still time.

The other thing is that establishing Darmouk as so much bigger than Dengar seems a bit silly to me. If it were that amazing - and that close to Rockhome - surely the dwarves would have tried to reclaim it by now. Even a dragon would have problems fighting off a whole army of dwarves. Also, if it's so easy to find, why on earth is it still "lost"?

Anyway, such problems aside, there's no reason why we can't mark the names on the map and redevelop them later.

The "great ridge of stone" sounds like it's basically a small mountain in the middle of the valley. Note that "the forgotten city was not hollowed out from the great ridge of stone... instead it was far below", so the ridge itself doesn't have to be all that big. The dome itself is presumably not visible from the surface, buried entirely underground. (Going from this description at least - I don't remember if there was other information, or even what exactly happened at Darmouk in the novel.)

In any case, I don't think "wet" actually suggests a swamp - the valley is "filled with dense woods of tall pines". The swamp presumably does not have pine trees. I think the "wet" thing is more about the feeling of the place; you could certainly use that word to describe northern Scotland, which is not all that different from the Northern Reaches.

The next problem is that the valley is "shaped like a long oval basin set amid the mountains", and the ridge - described as "short" - is "in the very centre of the valley, almost completely surrounded by a cluster of lakes". Perhaps we should be looking for a smaller valley? But I'm having trouble finding an oval-shaped valley in the Northern Reaches. The lakes are no problem as they could be quite small.

Actually, perhaps the valley itself is also quite small. There are four such valleys (surrounded by mountains) in Vestland and Soderfjord on the Rockhome border (between Landersfjord and Snowvale). They don't exactly qualify as lowlands, but the quotation is somewhat ambiguous on this point - "just above the cool, wet lowlands" is where they descended, which could mean they descended to the lowlands, or that the area they descended to was above the lowlands. Perhaps one of these would be the best location. Currently they are all marked as hill hexes, but nothing in the description necessarily contradicts that.
If you enjoy my maps, please consider supporting me on Patreon.