Emperor Hitoshi Masuto is exhausted with the centuries-long quarrel between four prefectures still furious over the Battle of Broken Spears. To end their conflict once and for all he has decreed ten weddings between twenty nobles of the Gekido, Hakaisuru, Kirai, and Namida clans—but not everyone is as enthusiastic as the emperor, and many opportunists are taking advantage of the situation for their own ends. 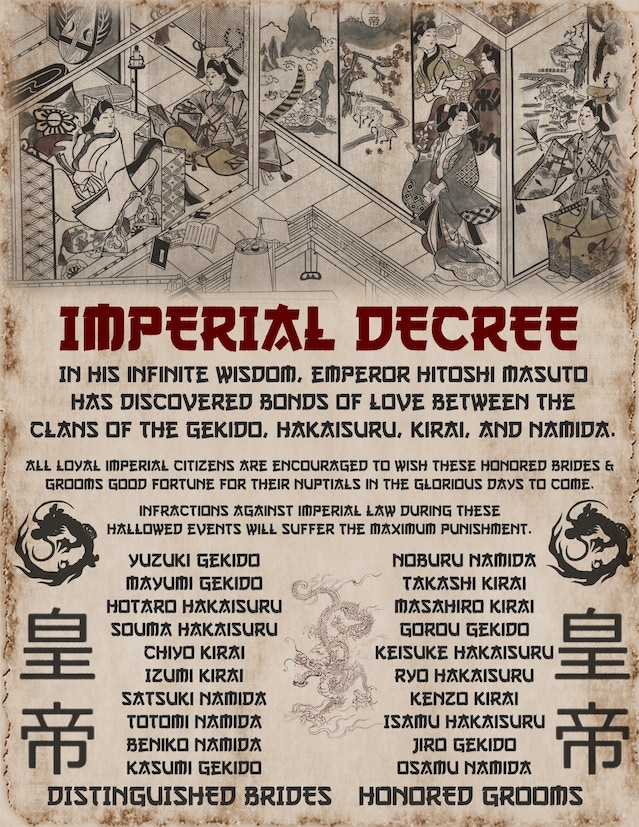 This book is so much more than ten imperial weddings! The ceremonies are a means to draw the adventurers to the metropolis of Sanbaoshi and keep them there, providing a structure for the narrative to continue as they explore the 147 pages devoted to this magnificent city and level up from 3rd all the way to 12th level!

There's over 120 monsters and NPCs within these pages and 40+ maps, as well as fantastic ukiyo-e illustrations alongside newly wrought images and plenty of selectively chosen stock art.

But you know what? There's a 25 page full-sized preview of the PDF and the entire table of contents on display over at DriveThruRPG so I invite you to take a look for yourself and see if Imperial Matchmaker is right for you.